As the Paris Agreement turns five; the Japan Climate Initiative leads the transition to a net-zero Japanese society. 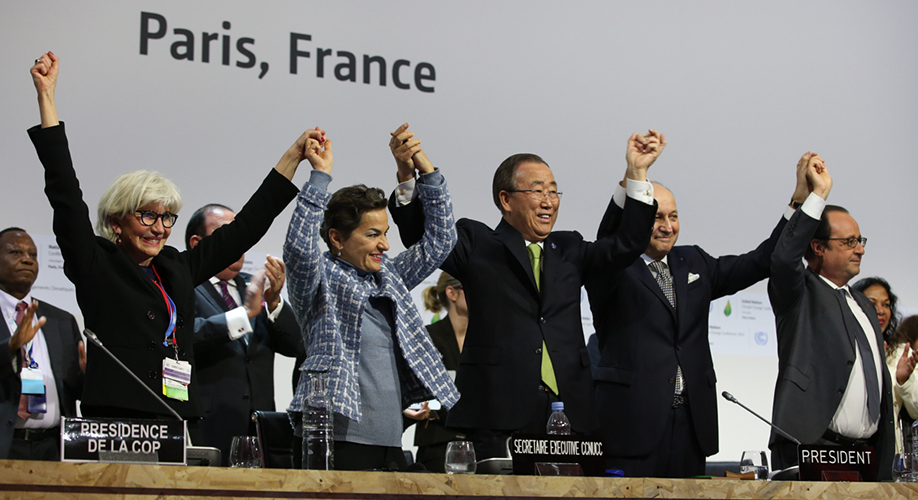 Photo by IISD/ENB | Kiara Worth

Adopted at COP21 in Paris, France on December 12, 2015, the Paris Agreement will soon celebrate its fifth anniversary.
The Paris Agreement is an important blueprint for the world to come together to address climate change. To achieve that goal, all Parties – including developed and developing countries – pledged to keep the global average temperature rise well below 2 degrees Celsius compared to pre-industrial levels and pursue every effort to limit global temperature rise to 1.5 degrees Celsius.

In the five years since its adoption, climate change impacts have worsened. In Japan, unprecedented weather disasters including Typhoon Faxai and Typhoon Hagibis in 2019 have brought huge loss to many people by destroying nature and their property.
Responding to the deepening climate crisis and the latest science presented in the IPCC 1.5 C Special Report in 2018, governments and companies, investors, local governments and educational institutions such as universities around the world– collectively known as subnational and non-state actors — are taking bold climate action in support of net-zero societies by 2050.

Japan is not an exception. There is a big growth of the number of the Japanese companies that have committed to the Science Based Targets Initiative and RE100 to mitigate their emissions and expand the use of renewable energy. Local governments are also stepping up to this challenge. In the past year, many local governments declared their commitment to be net zero carbon by 2050, increasing the number of subnational governments committed to decarbonization to over 180.
Japanese non-state actors, many of whom are Japan Climate Initiative (JCI) members, are truly leading the charge to address climate change at home.

On October 26, 2020, the Japanese government finally declared its intent to pursue a net-zero GHGs goal by 2050. For Japan to achieve net-zero emissions by 2050 and contribute to the realization of a decarbonized society as called forth by the Paris Agreement, there is still much work to be done.

JCI has called on the government to strengthen its climate policies through various communications and advocacy efforts in public forums as reflected through some examples below. Now, it is essential for the government to articulate the path to net-zero in concrete terms, and put in place the enabling policies for Japanese non-state actors to accelerate this transition towards net zero by 2050 through their own contributions.

1. Strengthen National Determined Contributions towards 2030 and greenhouse gas emission reduction targets
Prime Minister Suga committed to achieving carbon neutral by 2050 (October 26, 2020)
JCI’s statement to call on the Japanese Government for its NDC enhancement (February 4, 2020)
JCI’s statement in response to the Japanese government’s draft long-term strategy (May 16, 2019)
2. Green recovery from the coronavirus crisis that contributes to the transition towards a decarbonized society, rather than fixing its dependence on fossil fuels.
JCI submitted a message to the new Online Platform “Platform for Redesign 2020” (September 3, 2020)
Towards “Green Recovery”: Overcome the coronavirus crisis and tackle the climate crisis (May 13, 2020)

Cooperation between subnational and non-state actors and the Japanese government is indispensable to the delivery of the Paris Agreement. JCI commits to working with its members to maintain their commitment to bold climate action and to partner with the national government to pursue – together – a meaningful transition to a decarbonized Japanese society for the benefit of all of our people.

”America Is All In”, a statement presented by We Are Still In (December 10)
Press release / Statement

A statement presented by Alliances for Climate Action* （December 12）
Statement

*JCI is part of a global initiative called the Alliances for Climate Action, a global initiative that brings together multi-stakeholder national alliances to an inclusive net zero transition in their economies across Argentina, Japan, Mexico, South Africa, United States and Viet Nam.