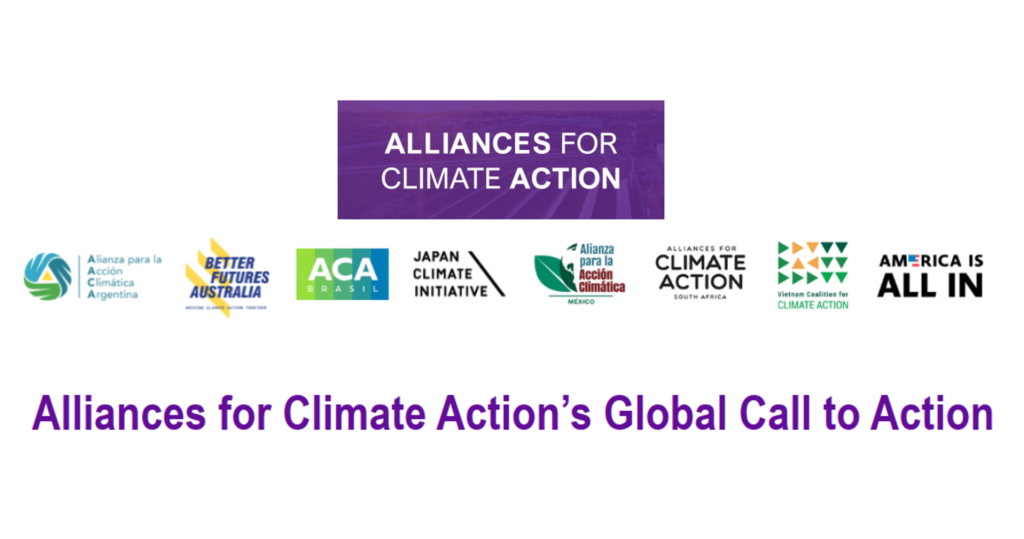 On October 30, 2021, the Alliances for Climate Action (ACA), an international alliance of domestic alliances of subnational and non-state actors from nine countries, including the Japan Climate Initiative (JCI), released the following global call to action. Featuring alliances from seven G20 countries (Argentina, Australia, Brazil, Japan, Mexico, South Africa and the United States), Viet Nam and a new alliance from Chile to be launched at COP26, the joint statement is calling on national leaders of countries participating in the G20 in Rome, Italy, and COP 26 in Glasgow, Scotland, to demonstrate their resolve to address the climate crisis. The statement also calls on subnational actors to join the effort to move from commitments to action at an unprecedented pace and scale in this critical decade for humanity.

Takejiro Sueyoshi, Representative of JCI stated: “In order for the world to surely achieve 1.5℃ target all together, the Japanese government needs more ambitious, concrete and immediate action to halve the emission by 2030 and reach net-zero by 2050 at the latest. We believe that, together, we can get there. In support of that goal, JCI will work with all of our members, not only to accelerate our own efforts but also to continue to engage the Japanese government on the policy conditions that will allow us to decarbonize Japanese society faster with contributions from all institutions. In addition, we will continue to promote cooperation between JCI members and non-state and subnational actors around the world to champion a whole society approach as our best hope to addressing the climate crisis.”

We are in the midst of a deep global transformation. Human society as we know it – the way in which we power our homes and industries, move around, and produce our food – needs to shift if we are to give every person around the world the chance of a dignified life while avoiding a collapse of the biophysical systems that sustain us.

The latest scientific reports confirm that we are at a pivotal moment for humanity. The climate crisis is upon us, as is a deepening crisis for nature, further exacerbated by the COVID-19 pandemic. The harbingers of what will happen if we don’t act – growing fires from western Canada and the United States to Australia, floods from China to Europe, droughts from South America to Africa – are all around us.

We can no longer stay on the sidelines. The time to act is now, and we have the tools to make it happen.

This coming decade, 2021-2030, is the decisive one if we are to meet the Paris Agreement’s goal of keeping global temperatures from rising above 1.5°C relative to preindustrial levels and avoid the worst impacts of climate change:

National governments have a critical role to play through their long-term signals, policies and investments. We – subnational, local and tribal governments, the private sector, academic, faith and cultural institutions, civil society organizations and so many others – are also essential to reaching our goals. Our commitments to date are significant. When accounting for the commitments of all subnational and non-state actors across the world to date, we could help bring the world close to the range of a 2°C compatible pathway. But science tells us that we need more.

If we are to keep global temperatures from rising above 1.5°C, we require an unprecedented mobilization across the world. We need a whole-of-society approach, in which national governments, subnational and non-state institutions and citizens, each joins in the challenge to be a force for good, helping each of our countries address our development needs and recover from the COVID-19 pandemic while solving the climate crisis. Everyone has a part to play, and each of us must step up.

As national governments prepare to meet in Rome, Italy for the G20 meeting and in Glasgow, Scotland for the 26th UNFCCC Conference of the Parties (COP26) at the end of this month, we call on G20 and other national leaders to demonstrate your resolve to address the climate crisis by:

We also call on our fellow subnational governments, companies, investors, academic, cultural and faith institutions, civil society organizations and other institutions to do our part to help deliver and surpass our respective countries’ climate targets by:

Through Alliances for Climate Action, over 6000 cities, state, regional and tribal governments, companies, investors, faith, cultural and academic institutions and civil society organizations have come together in our respective national alliances to accelerate national transitions aligned with 1.5°C and net-zero in our countries, including Argentina, Australia, Brazil, Chile, Japan, Mexico, South Africa, the United States and Viet Nam. We are acting now.

The G20 and UNFCCC COP26 need to provide an unmistakable message that the world will work together to power the transition to net-zero, resilient societies by 2050, and deliver the emission reductions and climate preparedness by 2030 to make this transition unstoppable.

We stand ready to work with our national governments and other subnational and non-state institutions based on the best available scientific knowledge to support the delivery of nationally driven transitions around the world. Join us.